How the Trailer Breakaway System Works 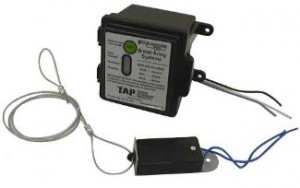 Battery: At the front of your trailer is a black plastic case that holds a 12 volt battery. There are two wires connected to the battery at the top. One wire is the “ground” wire. The second wire (hot) connects to the breakaway switch. If there is a third wire, it’s hooked to a small charger that charges the battery off the tow vehicle, through the trailer plug. If there are only two wires, there is no way that the battery can be recharged from the tow vehicle, and you must charge it by hooking an electric or solar battery charger to it.  Or, you can install a small maintenance battery charger inside the battery box.

These 12 volt batteries often have a life of only two years, and since new batteries are not always fully charged, you must charge them before connecting the system. If you have a charger installed, it can charge the battery by plugging the trailer plug into a running tow vehicle for twenty minutes.  Check the battery charge frequently. The entire battery can be depleted if the pin is pulled out of the switch for 20-25 minutes, IF it’s fully charged. If it’s not fully charged, it can deplete in 10 minutes or less. When checking the charge on the battery, first disconnect the trailer plug or you will be checking the tow vehicle’s battery charge instead.

Switch: The breakaway switch is wired to the battery in the battery case & is mounted between the battery and the tow vehicle. It contains a pin that is attached to a wire cable, 44-48 inches long.

WHY is it important to have your breakaway system working? There are several ways the trailer can become disconnected from the tow vehicle.  An accident or a mistake in hitching the coupler to the ball can cause the safety chains or ball mount to break or come out of the receiver. If that happens, the heavy trailer with your animals in it could roll into oncoming traffic or into a ditch and land on it’s side. If your breakaway system is working, the second the trailer becomes disconnected, the pin pulls out of the switch & engages the electric brakes ---and the trailer STOPS. This gives you between 10-25 minutes to chock the tires and stabilize the trailer before the battery charge depletes.

Edgar Valenzuela
Question...If the emergency breakaway system safety pin breaks in half inside the switch box, but the other half of the safety pin is still in place holding the prongs open can the breaks still lock up at any time. Nope. The broken end of the pin that is still in the switch will hold the prongs open & the brakes will not engage unless the pin is pulled all the way out. Once the pin is pulled out, the brakes will engage for about 20 minutes or until the battery dies. So, if there is no pin & the trailer is rolling fine, it means that there is a dead battery.
James johnson
If every thing is hooked right how do you check to see if brakes are working? To check to see if the break away system is working, you can pull the little plastic pin from the switch box with a pliers. Then slowly move the tow vehicle forward. If the brakes lock up, the Breakaway Battery is charged & the system is working. if the battery is depleted, the system won't work & the trailer will roll freely. Because removing the pin starts the system to work. The battery will completely deplete after the pin is out 15-20 minutes, so put it back in right away.
James johnson
If every thing is hooked right how do you check to see if brakes are working
Debbie Stice
In answer to these comments/ questions: Edgar: If the pin is broken off, but still in the switch, it lets the trailer brakes operate as normal. We offer replacement pins with the 4 ft. cord attached that can just be switched in a few seconds when the trailer is at rest. James: The easiest way to check if the emergency break-a-way system is working is to pull the pin from the switch box near the tongue and slowly drive the tow vehicle forward. If the trailer brakes lock up, your battery is working. The battery will drain in 15-20 minutes, so put the pin back in quickly.
Brenda Jo Jones
Do you have photos of the pieces that you mention in your article? That would help me understand better. From what I read, I believe that the pin on my switch is out and that means the battery is now dead. Thanks so much. Yes, everything is pictured on our website, under the left column of categories: Break Away System Get a new battery to be safe. They last 3-5 years now!
Olboa
Edgar The answer to your question is the brakes simply will NOT work if the prongs do not connect. James The best way to test your breakaway system is to jack up one wheel, spin the wheel and pull the breakaway cable The spinning wheel should come to an emergency stop
Debbie Stice
A quick way to check if the trailer brakes are working & the battery is charged: Hook up all systems to the tow vehicle. Locate the exterior breakaway switch & pull the black plastic pin out (you may need a pliers, but be careful no to break the pin). Slowly move the tow vehicle forward. If the trailer brakes lock up & the wheels won't turn, YOUR BATTERY IS CHARGED and your breakaway system is working! Re-insert the pin into the switch. If your trailer rolls without restraint, you need to re-charge or replace your 12 volt battery located in a battery box at the front of your trailer.
Leo
I have a small dump trailer that won’t lock up when the breakaway pin is pulled while it is plugged into the truck . Any help ? You need a new 12 volt battery!
Quick View